About Us » School History

St. Patrick Academy is the most recent part of has a long and unique history of educating local children and young adults at St. Patrick Parish.

The original school building was constructed behind the church, near the Rhode Island State House. Fully furnished, it cost about $500. 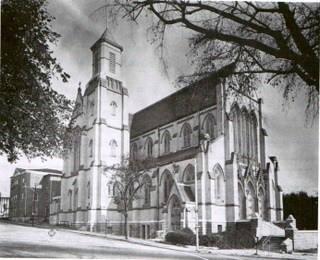 The school was moved to Davis Street and enlarged. The building was able to hold 300 children in each of the two rooms "with yards and outhouses, separate for boys and girls" (Fr. Wiley's Diary) and was used as a Sunday school only.

A day school for boys, ages 8 and older, opened with 35 students, with Mr. John Coyle as the first teacher.  Tuition was $1.00 per quarter.

Fr. Synnot of St. Patrick Church applied for the Sisters of Mercy to take charge of a school for girls. The first girls' school opened, using the first floor of the existing school, while the boys' school continued on the second floor.

A larger school was constructed on the site of the original one. The new brick structure contained eight classrooms and a large gathering hall. 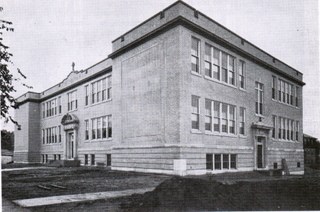 The cornerstone of the present school building was laid on the site on Smith Street.

The last graduation was held at the old school; Sr. Scholastica R.S.M. was principal at the time.

Fr. Martin Reddy turned the Davis Street School into a Senior High School where another religious community, the Faithful Companions of Jesus, served. Mother M. Emily, F.C.J. was the first principal of the high school.

The girls’ high school became a diocesan school and was moved to Centredale (Johnston), Rhode Island.

As a result of the construction of Route 95, the number of parish families was reduced by half, causing a drop in parish income, and forcing the first parochial school in Rhode Island to close.

Mr. Stephen Raymond, a math teacher at the school since 1976, was named principal.

Falling enrollment and financial problems led the parish and   diocese to agree to close the school at the end of the 2002-03 school year.  However, a last minute appeal by the pastor, Fr. Raymond Kelly, rallied the parish community and raised more than $500,000 in cash and pledges. Bishop Robert Mulvee agreed to allow the school to stay open.

When the elementary school closed at the end of the 2008-09 school year, again for reasons of enrollment and finances, Fr. James Ruggieri’s vision of a new affordable urban Catholic high school was approved by Bishop Thomas Tobin.  In the first transition year, grades 6-8 were maintained from the elementary school. From these classes, the Academy would "grow up" into a full high school operation of grades 9-12.
New Principal: 1 July 2011
Mr. Bruce Daigle succeeded Mr. Stephen Raymond as Principal of St. Patrick Academy as the school’s grade structure evolved into grades 8-10.  A new high school academic program was developed, policies and procedures were revised, and new faculty and staff were added.

St. Patrick Academy's first graduation was held on Saturday, June 7, 2014, with eleven graduates, all college-bound!
Sixth Graduation: 8 June 2019
St. Patrick Academy graduated its sixth class of seniors, a class of 20, all of whom graduated and were accepted at 34 colleges and universities. The Academy has a graduation rate of 99% with a total of 85 graduates. 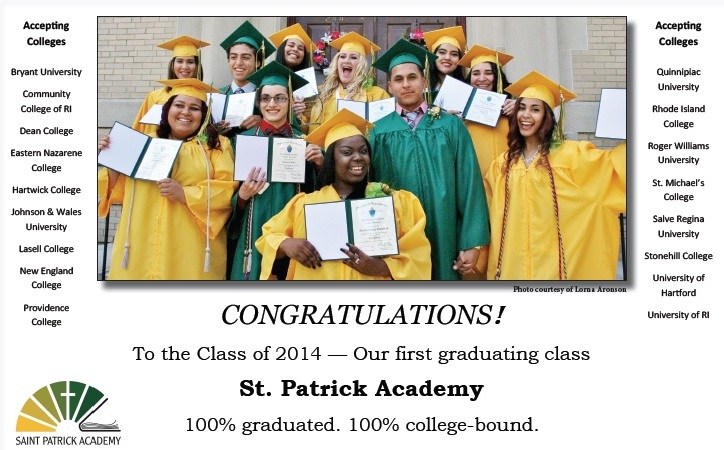